Dubai�s collection of super-rich homes is set to expand with a new 42,000 square feet penthouse in the already deluxe One at Palm Jumeirah. The costly penthouse already has a listed price of Dh200 million and looks to be the most expensive penthouse within the emirate.� The apartment will have a roomy 17,000 square feet terrace, with water features and a landscaped garden and luxuries such as a beauty centre, sauna and steam room as well as a private cinema, art gallery, and library and media/gaming rooms in addition to the eight bedrooms, seven elegant bathrooms and twelve spaces to park your cars.

Omniyat and Drake & Scull International jointly own the Dh2 billion project on the first plot on the trunk of Palm Jumeirah, which houses some 90 high end apartments with units starting at Dh14 million.

The Japanese interior design company, Super Potato, has designed the apartments and the luxurious extras such as the landscaped areas, three pools, spas, library, private cinema and yacht club were designed by the Lebanese landscape architect Vladimir Djurovic. So far buyers have flocked to purchase these super deluxe apartments from as far afield as New York as well as locals. �Last year the most expensive apartment at The Fairmont Palm Residences sold for Dh24.43 million, and in 2014 one penthouse in Burj Khalifa sold for Dh60 million but the most expensive real estate in the world is listed as a penthouse in the Odeon Tower in Monaco which is going for a cool Dh 1.47 billion.
� 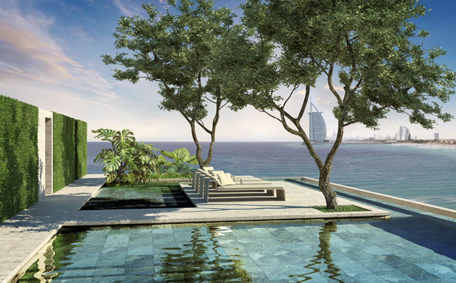