INVASION at The ACT Dubai Featuring music by Olivier Giacomotto

On Friday 29th of July, INVASION conquers The ACT - DUBAI to deploy the electronic vibes of international Djs.

International DJ, charting producer, in-demand remixer, Beatport Music Awards nominee, Olivier Giacomotto is a proven integral player of the electronic music scene. In the last year alone, Olivier Giacomotto has managed no less than 6 Top Ten hit productions, a feat that has lead to him becoming one of the most in demand remixers/producers in the industry and firmly established him amongst the continent's leading acts...� 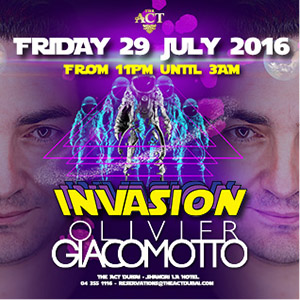