Without a doubt the biggest DJ on the planet, and possibly one of the world's biggest pop stars, David Guetta has confirmed that he's returning to Dubai on Thursday December 18 for Live at Atlantis.
Having played in the UAE several times, including for Creamfields and previously at Live at Atlantis in May 2013, he's no stranger to the city and will be bringing his usual infectious energy and blend of house and EDM that's seen him rise to the top of his profession.

The date and lineup was announced at the previous Sandance, with big cheers coming from the 10,000+ crowd.
His DJ CV reads like few others: he's had countless Number 1 singles, has sold out his F*** Me I'm Famous night in Pacha for years, while his 2009 album One Love proved to be the moment when he hit mainstream success thanks to multiple hit singles including 'When Love Takes Over,' 'Sexy Chick' and 'Getting Over You.' To date, he's sold more than 6 million albums, and 15 million singles worldwide, while he's also been on constant touring duty for the last 5 years, taking his EDM-friendly sound across the world several times. 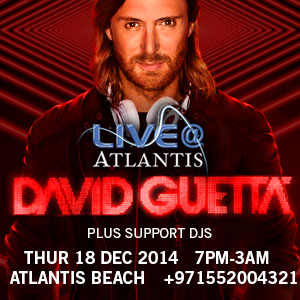